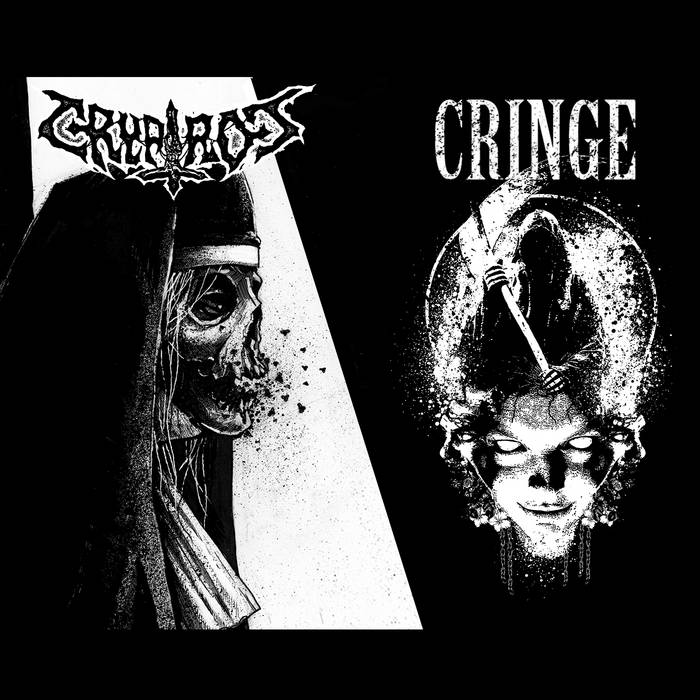 "8 out of 10"
-Metal Trenches
metaltrenches.com/reviews/crypt-rot-cringe-split-1306

"Sweet mother of splits, this one is going to be a beast. Crypt Rot are as filthy as their name suggests; “Serpentine Atonement” is seven and a half minutes of scorching death metal riffing and ravaging screams punctuated by chaotic shredding. There’s a little vocal surprise in there too that blew me away when it hit- it’s jarring, but it works. Cringe veer more into thrash territory with “Searing Sin,” which could easily hang with the pioneers of the genre. It’s decidedly more clean-cut, but no less unhinged. Don’t come into this one unprepared."
- Toilet ov Hell
www.toiletovhell.com/this-toilet-tuesday-2618/

"This record is goddamn insane. This is one of those death metal splits where not only can you see the bodies flying around the room during the release show, but you can see the scene forming up out of the sheer emotional power that these two groups bring to the fore. Crypt rot's side of the split in and of itself is something I've spun three or four sides today, whereas Cringe deliver the kind of weird and maddeningly fucked up potency that we can't help but to fall in love with as fans of the modern death metal scene."
- Two Guys Metal Reviews
www.twoguysmetalreviews.com/2018/01/crypt-rotcringe-split.html

"This is punchy, groovy thrash with some old-school hardcore and punk influences thrown in for good measure. The singer’s harsh snarl immediately puts me in mind of 90s hardcore, while the wailing solos and jagged riffs are classic thrash mixed with something a bit more snub-nosed and brutal from the underground mosh pits."
-Wonderbox Metal
wp.me/p3zRmN-85E


Crypt Rot has gained some international noteriety w/ their debut EP, "Embryonic Devils", released by Southern Lord last year. It also doesn't hurt that the band share members w/ Homewrecker and Scorched either. Since their debut release, the band has continued to stay busy playing countless shows along with some short tour runs supporting the likes of Morta Skuld, Embalmer, Scorched, Like Rats and more. While the band loosely fit in that retro SweDeath resurgence, they share more similarities to Carnage than they do Entombed. There are also hints of their punk/hardcore roots that reflect in D-Beat fashion, all the while maintaining a more black metal image. The two new songs presented on this Split, while recorded over a year ago, act as a sneak peak into the direction the band are currently headed.

Cringe ride the other side of the spectrum - their foundation firmly planted in the Thrash arena. In a similar fashion to their Ashtabula brothers Crypt Rot, they too proudly wear their punk/hardcore influences on their sleeve while paving their own path in the extreme. Although there is currently a big thrash revival in underground circles, i.e. (citing another Ohio act's) Midnight & HAMMR, Cringe take their cues from early Slayer, Possessed, DRI and Exodus rather than Motorhead, Kreator, Sodom, and Destruction. Similar to Crypt Rot, the band have an underlining hardcore aesthetic that comes through in a geniune / non-contrived fashion. Their self-released debut, "Through the Mist", brought me back to when I first heard "Show No Mercy" and "Hell Awaits". These gents, while still youngsters, are HUNGRY and tour almost non-stop throughout the year attempting to leave their mark on the minds of rabid metal fans nationwide. Like Crypt Rot's offering on this EP, Cringe's contribution gives insight to their upcoming debut full-length to be released later this year on none other than Seeing Red Records.

Extreme music is about creating a world beyond limitations, restrictions, and conventions. Our mission is to bring the masses an eclectic array of artists from various genres and styles and to celebrate the perpetual survival of underground music in the face of trends, business hawks, and naysayers whom have all made a conscious effort to distort and destroy what we hold dear. ... more

Bandcamp Daily  your guide to the world of Bandcamp

Khruangbin and Greg Foat stop by with their amazing new LPs.